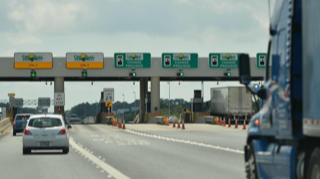 In recent years, the Polk Parkway(S.R. 570) has been the scene of many car and truck accidents.  There are several toll plazas that motorists are required to stop or slow to pay tolls for use of the parkway.  Drivers have been known to exceed speed limits or not pay attention when approaching the toll plaza and crash into another vehicle or into the guardrails on the approach.  When a driver is careless and not paying attention, for example, texting or speeding, this is referred to legally as negligence. Florida Standard Jury Instruction 401.4 defines negligence as the failure to use reasonable care, which is the care that a reasonably careful person would use under the circumstances. Further, if a person’s negligence causes an injury or damages, the negligent driver can be held accountable under Florida law and the injured person is entitled to compensation or damages. It was recently reported that a 2013 Isuzu semi-truck south on the Polk Parkway/State Road 570 near mile marker 20, for unknown reasons, crossed the center lane, entered the opposite lane and collided with an oncoming vehicle. One person was killed and others were injured.  The Moody Law firm has handled many cases like this and it’s possible the driver of the semi-truck did not maintain control of his vehicle for a variety of reasons, i.e., sleep fatigue, texting, alcohol, or other reasons. The circumstances will be investigated to determine the cause of the crash.  Truck drivers are held to a higher standard of driving because the truck for which they operate and control is larger and more dangerous than an ordinary car.  Truck drivers must hold a special commercial driver license or CDL, and special laws regulate these commercial drivers which require them to meet all the qualifications for safe driving, such as hours of service and rest logs.  Hiring a lawyer to preserve the logs and document the accident scene is vital to being able to protect the rights of the innocent injured.  Florida law has adopted most all the Federal Motor Carrier Safety Regulations. These regulations outline procedures for commercial trucking transportation, including the regulation for driver workplace drug and alcohol testing, commercial driver license standards, and safety regulations.  These rules and regulations can be found under Part 40, Part 382, Part 383, Part 387, Part 390, Part 391, Part 392, Part 393, Part 395 and Part 397 of the Federal Motor Carrier Safety Regulations.

At Moody Law we have a rapid response team that we can activate to immediately investigate and gather evidence at the scene so that important material evidence does not disappear.  Our law firm handled a case where a commercial truck driver rear-ended two cars on U.S. Highway 27, near Davenport, Florida, killing two innocent motorist and seriously injuring others.  The truck driver had not had any sleep for 32 hours before the crash.  This sleep fatigued commercial truck driver was charged and convicted criminally for his actions and went to prison for many years. In another case, a mother and father were travelling on U.S. Highway I-4 with their small child returning home from Disney World when a tire blew and both parents were killed.  The minor child survived and became an orphan because both his parents died in the accident.  Moody Law’s quick rapid response team recovered tire tread remnants along the roadside which later proved to be the vital and critical evidence that showed a manufacture defect in the blown tire.  Had Moody Law’s team not acted promptly to preserve the tire tread remnants, there would have been no way to prove and win a recovery in the case.  The orphan child recovered a large verdict at a jury trial.

Please call or email our office should you have any question or need assistance.